This strategy consists of candle formations that will help us predict the future direction of the market. In our example, we will use the EUR / JPY currency pair, because the euro will tend to react impulsively to the changing market conditions against the Japanese yen, which can also benefit our strategy.

We chose a time frame of 240 minutes, ie four hours, to be able to capture larger movements on the chosen trading instrument.

The so-called bear turn (declining trend) is composed of three candles - the first is growth (usually a green candle with a wick up) and the second can be either rising or falling, but must be about the level of the previous growth candle, it means do not exceed significantly above or under this first candle. The third candle must end below the minimum of the second candle.

In bullish turnover, the situation is similar, but on the opposite side. The strategy begins with the first falling candle with the wick down (usually red), the second candle should be smaller than the first, and the last third candle must end above the maximum of the second candle.

We will enter long positions (ie shop) at the opening of the fourth candle. We would close the position after the end of this fourth candle, ie after four hours. As we can see in the chart, we would record three buying positions, with two ending in profit and the third in minimal loss.

Otherwise, we will sell (ie short-circuit) also at the opening of the fourth candle and we will close the position when this candle ends, ie after four hours. As we can see in the chart, we would realize two sales positions, one ending in a profit and one in a minimal loss.

However, it is necessary to realise that not even this strategy is not infallible and may not work in certain cases. It is possible to use it for other instruments.

This strategy is suitable also for advanced traders.

We can use a smaller stop loss for this strategy, e.g. 50 pips and we usually don't use the Take profit order.

However, it is important to realize that even this strategy is not infallible and in some cases may not work. It can also be used for other instruments. 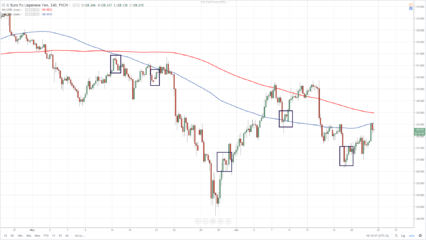 This strategy is suitable for advanced traders.

Start with this strategy

Trading is risky and your entire investment may be at risk.

Warning: The presented strategy is not investment advice and should not be taken as a crucial factor for successful trading, as it could be too complicated for a client starting trading and would not have to offer the desired results. This strategy is part of the marketing material and is provided free of charge to support informed decisions and understanding of trading markets.

Risk warning: CFDs are complex instruments and come with a high risk of rapid loss of money due to leverage. 66.67% of retail investors' accounts lose money when trading CFDs with this provider. You should consider whether you understand how CFDs work and whether you can afford to take a high risk of losing your money.

Risk warning: CFDs are complex instruments and come with a high risk of losing money rapidly due to leverage. 66.67% of retail investor accounts lose money when trading CFDs with this provider. You should consider whether you understand how CFDs work and whether you can afford to take the high risk of losing your money. Read our Risk Disclosures